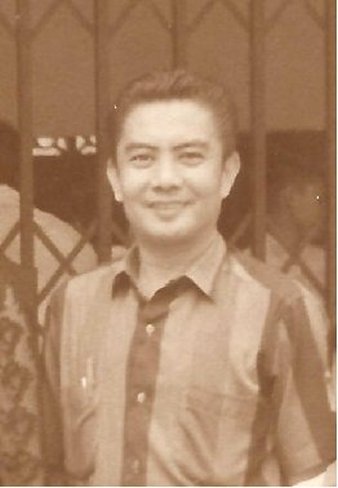 Mr. Severino Julian has moved on. He took the 12:00 am train to Heaven last Friday, October 5, 2007.   He was 79 and had been sick for quite a while. I kept in touch with him through the years but most especially after 2000 when the Foundation started formal operations. As a central advocacy, the Foundation decided to adopt the cause of upgrading the quality of public school education in general and that of Arellano High School in particular. I, personally, reconnected with my old teachers. I do not know how long he taught at the Arellano but I do know that the students of our generation and after that loved him. It was sad that the government could only pay him a pension of about P 3,000 (a figure I had to get from other people, he being such a proud man) which was barely enough for his medicines. He soldiered on, though, always greeting me with a big smile when I visited and never told me how rough it was to be retired on that pension.

He was fortunate in that he had a sister whose entire family took such good care of him, up to the end. "Napakabait kasing tao", they all said when we thanked them for taking such good care of him. When his emphysema got really bad, they would take him to the hospital and that was the only time when they would accept some help from me. Such pride, such dignity. Another student gave him a wheelchair, something he was so proud of ("Kasi naalala nila ako"), even when he could no longer use it as he was bed-ridden already. He eventually agreed to receive a monthly stipend from me, after a lot of entreatments and assurances from me (“…Sir, professorial chair po ninyo iyan"). Proud man that he was, he sent me a thank you note every time, every single time, thanking me and telling me he was praying for me and my family in an old Arellano High School stationary. My officers at the Foundation remember him with great fondness for this act of "old school" gratitude.

I tried tI tried to publicly express my thanks to him several times. Two, in particular, he appreciated. First, I requested that the Arellano library we rebuilt be named after five living teachers of our generation and that he be one of them. I made sure that the library was worthy of his name: fully air-conditioned, multi-media and with the latest books worthy of Ateneo de Manila. Second, I named a professorial chair at De La Salle University after him, among sixteen other Arellano teachers. I also made sure that the chair was worthy of his name. It is fully-funded and is granted only to senior La Salle professors. He was profuse with his thanks. I felt he deserved more.    I really felt bad about his long illness. It took away so much from him from a physical standpoint. He loved to go to Mass in Quiapo which was a long commute from his place. He was active in his parish, always available for any activity the parish council had. I know he felt bad he could not do more as his ailment sapped his strength away, irreversibly. In the end, he was reduced to half his body weight and had to be nursed like a little child. But, true to form, he wore an Arellano T-shirt whose sleeves he cut off for better ventilation, he said. He loved the school so much that he gave it everything he had, including free advertising space on his chest in his last few days.

In one of my earlier visits, he gave me a surprise, something I will cherish forever. He gifted me with a copy of our World History text book (by Elson) which he said he, in turn, received from Miss Librada Santos herself, my mentor and my second mother. It turned out that she mentored him when he was a newly-appointed teacher of Social Studies at the Arellano. There was a tradition that retiring senior teachers passed on their textbooks to their chosen “proteges.” I still have the book and I still read it because it connects me to two great teachers of Arellano. He knew I loved history (the only time I got a grade better than Mauro in anything at the Arellano) and that I worshipped Miss Santos. He said, "Ito lang ang mabibigay ko sa iyo bilang pasasalamat sa pag-alala mo sa akin". Nothing in the world is more priceless to me now.   I will never forget my last visit to him.

For some reason, I woke up with his image vividly etched in my mind. It sort of “refreshed” itself every so often, as a computer monitor would. By 9:00 am, I impulsively cancelled my schedule for the day, including a very important lunch I had scheduled earlier, and asked Elaine to accompany me to his house in Cainta without delay. A few days earlier, I had sent Diana to check on him and attend to his needs as I was tied down with work in the Foundation. That day, however, I felt I had to see him myself. And I am so glad I did. I talked with him for a long time and I was able to make him laugh (mostly with his eyes). I was happy that he recognized and that he responded to my questions and attempts at "pa-kenkoy". On another impulse, I gave him a hand massage, something I tried on my mother before she moved on and which she enjoyed. He responded and I continued it for a while. Through his eyes, he showed me that he was happy. Somehow, I felt I was able to tell him "Thank you, thank you and thank you" for being so good to me when I was so young and needed all the "good-ness" I could get from anyone. Ciciyak cu ngeni. I am so happy I had a chance to see him one last time and kiss him and thank him. He deserved so much more but, at that time, that was all I could give him.

And, then, early Friday morning in Bangkok where I was for a Chase Manhattan Bank reunion, I received a cryptic text message saying "wala na po c uncle" from a number I did not recognize. I wasn't sure who it was so I had my officers call up his home; his niece confirmed that it was, indeed, Mr. Julian who passed away. Later, his family sent me a “thank you” note for looking after him. I answered that it was my honor and my pleasure entirely and that he really deserved more. His body was buried before I could make it back to Manila but Elaine and Diana represented me and the Foundation. His sister told them that, after a long sickness he passed away quickly, "Parang hinintay lang bumisita si Mr. Fajardo". I did not realize I meant so much to him. And, now, I cry again in the quiet of my room. I cry for him and all my Arellano teachers who have moved on.

I felt sad about the passing away of this one man. Several teachers have mentored me but he was the only one who brought out the gentle me in Arellano. He introduced me to a more peaceful, more serene approach to life; it was only later when I was deep in my Buddhist studies that I discovered that he was teaching me about loving kindness and compassion. He was never my teacher in class but the years we spent with him in Baguio for the Hi-Y annual conference every December (one week lang but unforgettable) taught me far more than the semesters I spent with our “official” teachers. For one thing, it was the only time I was away from home and away from Manila. At the time, it was like going abroad already for; after all, my world was Antonio Rivera, Arellano, the USIS library in Escolta and, occasionally, the Luneta. For another, we met students from other high schools and my world expanded a hundred fold: there were so many other guys like you and me and we could hold our own! I think that it was there that we ourselves bonded, do you remember? Everyone was fair game for pranks: I woke up in the comfort room because I fell asleep before the rest of the pack. We stole each other’s food like prisoners in a stalag. We marched up and down Baguio for no reason except that our legs could still take us around. Through all these, Mr. Julian kept his peace and, in the end, we repaid him by not burning down Teachers’ Camp. Thus, every year, I devised all kinds of creative ways to raise the P 40.00 we needed to make it to Baguio (it was always my ninong, Tio Maneng Vijungco, who came through with the money and that is why I will love the man forever).

Even when we were juniors and seniors at the Main Building, I still visited him at Lope de Vega and hang out in his office. He always had a kind word for me, always found some way to cheer me on. He was profuse with his compliments and short on his judgment but, at thirteen or fourteen, I did not care about such things as realism. All I knew was there was at least one man in the world who believed I could rise above Tondo. And that was enough.   And now I ask myself, did I do enough for him and all my other teachers?   I am sorry to take too much of your time. I have to tell somebody about this great man who passed away quietly last Friday. For all his good works and for the type of man that he was, he must not be forgotten.   Let us, you and I, at least promise to remember him. If we at least think of him and thank him every so often when we remember our teen years at the Arellano, then he shall live forever.