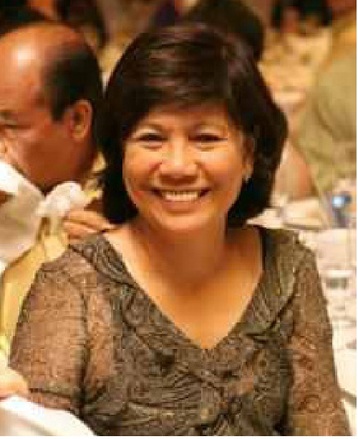 
From Blumentritt Market to the Financial Centers of L.A.
I came from a family of few resources. There are eight children and my parents were not even high school graduates. They were wholesale/retail merchants, selling mostly cigarettes in Blumentritt public market back in the 50’s. Early in my childhood, my parents inculcated in us the value of education. "It is an asset that cannot be stolen and the only thing I can bequeath to you," my mother kept repeating.As a child, I dreamed to be a doctor. Don’t we all? My Nanay (Mother)witnessed our neighbor’s younger children stop schooling to fund the tuition of the oldest who was taking medicine. Being the realistic and practical parent, she dissuaded me from being a doctor. She does not want to take away the opportunity from another child for my benefit. She was fair.

Since I was in 5th grade, I helped my parents in the store. During the first two years in college, I manned the store on weekdays before school and on weekends. During the summer, my parents would find something for me to sell (bukayo, posporo, Tagalog komiks). During Christmas and New Year Eve, we were on the "bangketa," selling "pan Americano." I was ashamed my classmates would see me vending in the market, but what could I do?

No Gabay Kapatid
In my senior year in the 60’s, there was no Gabay Kapatid, no college prep talk at school - just assignments, recitations and tests. With no advisers, I went where my classmates went. One friend encouraged me to take the entrance test at the University of the Philippines, which I passed. Come enrollment time, I asked my mother to accompany me to enroll at my new college. From our place in Manuguit to UP- Diliman, it took us two rides and over an hour to go to UP-Diliman. Nanay must have been exhausted with the trip; she did not allow me to enroll at UP. The University was too far from home! Nanay then decided I should enroll at the University of the East. On our way to UE, we met her "kumpadre," a lawyer, right at Lepanto. They talked and he suggested the Philippine College of Commerce, now the Polytechnic University of the Philippines. He said graduates of that school do very well after graduating. I was "clueless" and Nanay-dependent. With me being the eldest, I am the family’s guinea pig. My Nanay may have been "clueless" too, as to where I should go to college. Bottom line: my Nanay enrolled me at PCC. That sealed my course - I would take Commerce. My major depended on how I do in my classes.After two years at PCC, I got a job as steno-typist for the credit manager of BORMAHECO, a heavy equipment company in Makati. I pursued my education at night, going to school until 9:30 pm while working full-time. It was not easy having only 4-5 hours of sleep. Take note that during those times, we worked entire Saturdays. Dividing my time between a full-time job, the store and night school before homework and studying was difficult. I am not sure how I did it. Patience and perseverance were traits that helped me.

Typing job
With the help of my aunt, I landed a typing job at the Bureau of Public Highways, the kind of job one gets by knowing the right people. The work at the government office was lighter and my supervisor was lenient. Most of us "peons" were working students. There were distractions in the office, boys and barkada. I cannot hang out with them. School was a "damper." I was determined to complete my college education so much I ignored these distractions. I simply focused on my schooling the next 2.5 years, including 3 summers to finish my degree.I graduated at PCC in 1969 with a Bachelor’s degree in Commerce in Accounting. When I passed the CPA board exam in 1970, my parents were so elated they gave me a big party. I was the first to finish college and bring such honor to the family. My heart warms up to such thoughts as I write this. When I got my CPA certificate, I felt invincible. Armed with my certificate and resume, I personally went to Citibank and Bank of America to apply for a job. Little did I know they favored graduates of exclusive schools. However, I believed in my hard-earned credentials and it would be just a matter of time. Instead, I got a junior accountant position in Plasteel, Inc., in Makati. The accounting manager who interviewed me told me later I was chosen because I was so persistent, calling her repeatedly for their decision. In fact, I got my job at the Development Bank of the Philippines due to my persistence in asking my friend for job openings. In my dictionary, persistence means "kulit to death."

Migration to U.S.
In 1969, immigration to the USA for professionals - teachers, engineers, accountants - was open. A classmate/friend encouraged me to apply for immigration. Again, I , the "clueless," stated that "I do not know anybody in the States." He said the approval process takes time, and I can decide later whether or not to go. I prepared to apply but first I had to save a lot of money from my meager income. I was making 48 pesos a week. I had to pay for transcript of records, diploma, and the application fee of $25. The exchange rate was PHP 3.90 per USD. I applied for immigration secretly from my parents. And the clock started ticking. Tick, tock, tick, tock.I met my future husband in 1971 in the office. He was the Engineering Supervisor. I got my papers for immigration in 1972. We decided to go together so we got married in 1973. In pursuing the application, we found out we cannot afford the costs of the documentations related to immigration: passports, clearances, medicals, processing fee. We decided to put immigration on hold. Then martial law was declared and immigration was frozen. In 1978, with two children, immigration was opened again, I persistently encouraged my husband to immigrate with our two children. He acquiesced and we came to the USA in 1979.

Winter of 1979
We arrived in Los Angeles in the winter of 1979. We were "adopted by a good friend" when we arrived. My first job was as an accounting clerk with Bullock’s. My husband was luckily hired by a friend with an aerospace company. I believed in my heart that the accounting clerk job was temporary. I persistently watched the papers for the job that I liked. And voila, Bank of America was advertising my dream job of an auditor! My dream job at my dream company. I pursued my dream job and became my career. I had worked with various banks, Imperial Bank, Republic Factors, HSBC and Wells Fargo. Citibank was hiring me, but the money offered was not good. Ahhh, revenge is sweet.My desire to achieve what my Nanay described to me as an asset I would never lose - my education - drove me to accomplish what I have now. Even though I was "clueless" then, paying heed to my Nanay’s wise words were wise indeed. There were also those friends I was fortunate to have who had opened certain doors that led to where I am now.We have three sons, an information technologist, a chemist and a software engineer, all with families of their own, all self-reliant members of the community and the country, each one having benefited from the same advice that I got from my Nanay.

No Regrets
There were regrets and I was "bad" because I reminded my Nanay of her "bad" suggestions/decisions. I would tell her "Doctor sana ako" or "UP grad sana ako." She felt bad too. One of my sisters actually graduated from U.P.-Los Banos. I would ask my mother, why did you let her go there when it is farther (the U.P. Los Banos campus is outside Metro Manila)?The UP thing was my biggest regret. As a PCC graduate, it took me longer to realize my objectives. When compared to a horse race, other grads could be good in the "arancada" but in the "recta," we are there at the same time. I believed it depends how ambitious a person is. (Batang Blumentritt ako, malapit sa San Lazaro and I picked up these words from the kubradors and my Tatay. He took me to the karerahan couple of times.)There are a lot of "what ifs" and I got my answers. I am happy with my family. I am satisfied with my accomplishments. I dealt with the cards handed to me in the best way I could. And God has been good to us.

Parents
My parents lived to see all of us graduate. Citizenship is faster in Australia, so my parents were petitioned by my sister in Australia. Unfortunately, my father died in 1987 before they immigrated. My Nanay immigrated in Australia in 1988 and became an Australian citizen. She had a very nice experience when visiting the USA. She has a friend, a merchant in Blumentritt, whom she had not seen for a long time. She met her again at Universal Studios, Hollywood. Can you imagine two public market merchants in Manila, a trade sometimes looked down by some people, living it up in Hollywood as their rewards for sending their kids to school? Hard work and sacrifice really pay.My mother died in January 2009. She had 19 grandchildren and 10 great-grandchildren.Among my siblings, five graduated from Arellano High School and two from Teodora Alonzo High School. They went through the same route as I did when pursuing their college education. We are scattered in three continents: three migrated to Melbourne, Australia, four in USA, and one stayed in the Philippines.We have retired from our employment. We are currently enjoying our three grandchildren and giving back to the society, primarily to the Church, by volunteering our time and talent. Together, we are coordinators of our parish’s Filipino Ministry, an organization that integrates the cultural, religious and social values of Filipinos into the American Catholic Church. We enjoy traveling; seeing places, meeting people, making friends and learning other culture. I am still studying … and enjoying it!