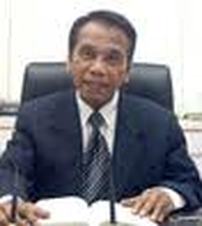 Justice Garcia was named to the SC on October 7, 2004, by then President Gloria Macapagal-Arroyo, as the Court's 156th Justice.

Born on October 30, 1937 in Aligtagtag, Batangas to Juan Garcia and Benedicta Castillo, Justice Garcia began his 46-year government career in 1962 with the Legal Office of the Office of the President. He worked as a solicitor in the Office of the Solicitor General in 1972 before he joined the Judiciary as City Judge of Branch 1, Caloocan City in 1974. He was appointed Regional Trial Court Judge in Angeles City and then in Caloocan City.

In 1988, Justice Garcia returned to the Executive Branch as Assistant Executive Secretary for Legal Affairs but later rejoined the Judiciary in December 1990 as an Associate Justice of the CA. He served at that post until March 13, 2001. He was later appointed Acting Presiding Justice, a position he held twice – from March 14 to July 29, 2001 and April 11, 2002 to April 8, 2003 – before he was finally named CA Presiding Justice on April 9, 2003.

Justice Garcia completed his elementary education at the P. Gomez Elementary School and his secondary education at the Arellano (Public) High School, both in Manila. He is an alumnus of the University of the Philippines, where he also finished law in 1961. He obtained a post-graduate degree in Public Administration as a government scholar from the University of Santo Tomas in 1967. He took a special course at the Harvard Law School in June 2000 and co-authored the book A Study of the Philippine Constitution with Justice Jose A.R. Melo, Prof. Perfecto V. Fernandez, and Judge Aloysius Alday.

On October 18, 2013 Retired Supreme Court Justice Cancio C. Garcia died of a heart attack. He was 75.

Justice Garcia is survived by his wife, the former Emerteria L. Reyes, and their four children.