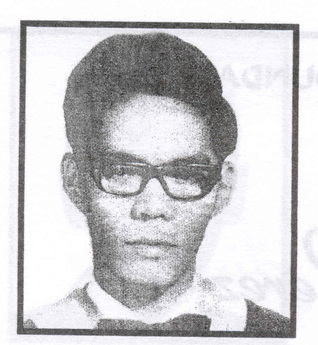 Carlos del Rosario was a brilliant student, and also won leadership, and oratory and declamation awards. He was chosen city councilor of Manila during Boys’ Scout and Girls’ Scout Week. He wrote for his high school paper and was chosen as delegate to the secondary school press conferences. At the Lyceum, he was vice-president of the student council in 1964. He became an instructor of political science at the Philippine College of Commerce.

Fellow teachers describe Carlos, called Caloy or Charlie by fellow activists, as amiable and adaptable, diligent and trustworthy. He was an organization man, but he was also dynamic, an effective articulator for nationalism, social reforms and civil liberties.

Charlie became a student activist in the mid‑1960s, organizing core groups which later became the base of the militant Kabataang Makabayan (KM), which he helped establish in 1964. Charlie was KM’s first Vice‑President. He also became its National Treasurer, General Secretary and Executive Member of the Committee of Advisers in its National Council.

Charlie was member of the provisional secretariat of the Movement for a Democratic Philippines (MDP) in 1970. He was a major personality of the 1970 First Quarter Storm (FQS).

In these capacities, Charlie helped organize the massive demonstrations, conferences and congresses that helped spread the nationalist movement in the Philippines.

Charlie was schooled in the ideas of nationalists such as Claro M. Recto, Lorenzo Tañada, Jose Laurel, Teodoro Agoncillo and Renato Constantino. He became opposed to neocolonialism and grew very critical of the iniquitous relationship between the US and the Philippines. He believed in the need for another propaganda movement in the Philippines such as that launched by Rizal, del Pilar and Lopez‑Jaena which started the Philippine Revolution in 1896. He also believed that the revolution started by Bonifacio and Jacinto of the Katipunan was unfinished and had to be completed.

These ideas were reflected in his subsequent involvement in the student movement in the 1960s and 1970s. He became a staunch nationalist and an advocate of national sovereignty and independence.

The circumstances around Charlie’s disappearance remain unclear. He was last seen on the night of 19 March 1971, putting up posters for a forthcoming MDP national congress inside the compound of the PCC in Lepanto, Manila. He was expected to come later to an MDP meeting in Quezon City but he never showed up.

Charlie’s parents searched for Charlie in the various military camps and asked for Malacañang’s help. They combed through newspapers, and listened daily to radio and television broadcasts, hoping to get some news of their missing son. But they never found Charlie. He was 28 years old when he disappeared.