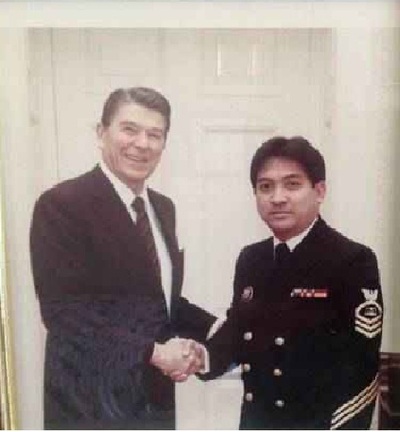 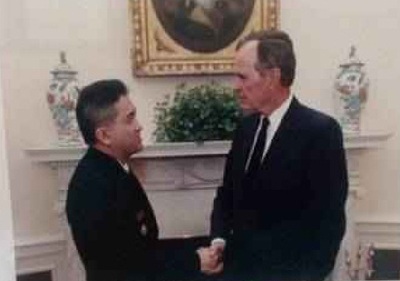 My family was poor since my mother could only do some sewing jobs at home for a living. At the age of two, I was separated from my father. We just tried to survive every day, In fact, I was not able to eat meat or chicken when I was young. Talong na may bagoong, tuyo, ginataan na gulay (Eggplant with anchovy, dried fish and vegetable curry) were our staple foods, especially since my mother was from Leyte where those dishes were common. I did not have shoes when I was a kid.

I grew up in M. Natividad Street in Santa Cruz, Manila, although I was born in Leyte.

I cannot recall much of my youth because I just went to school and played when I came home. I did not even have any photographs of myself, except my class photos, from when I was young. I graduated from high school in 1964 with no goals in life. I sold newspapers, shined shoes at the San Lazaro racetrack (umaakyat lang sa pader sa Tayuman para maka pasok [we climbed over the concrete fence just to get in]), sold cigarettes to jeepney drivers in San Lazaro and Tayuman streets, and worked at the post office for a month. I earned fifty pesos every payday when working for a printing press in Meycawayan, Bulacan. I always gave all my income to my mother. I joined the U.S. Navy in August of 1966 with a six-year contract. For four years, I did not give a damn whether I would be promoted or not, so I did not study for exams. Then a memo came up stating that those who did not pass the tests would be sent back to the Philippines. That’s when I began to study. Luckily in five years I made third class. I met my wife when I was on a 30-day leave in the Philippines in 1972. My mother made the introductions. After only two weeks, we got married. I was only 24, and my wife was 20. When she joined me in the United States, it was hard for us financially. However, I became more motivated when we had our first baby, so I kept studying to get promoted. An old shipmate on my first duty station called me and asked if I were a US citizen. I was not, so I applied for citizenship. When I got my citizenship, he took me to the White House where I worked for 11 years. A lot of my former shipmates could not believe I had reached the top of the enlisted rank. They underestimated me. There was one American Chief who had liked me a lot when I was a seaman. He told me: "Mario, you have potential in the Navy. Keep on doing what you’re doing and remember that it’s just like climbing a ladder: the higher you climb, the shakier it will be, so make sure your foundation is solid." I’m glad I followed his advice because when I reached the top, I knew what was at the bottom. I spent 27 years in the Navy, and it taught me a lot in life. I guess my advice to all the kids is always do your best because you don’t know who’s watching you.