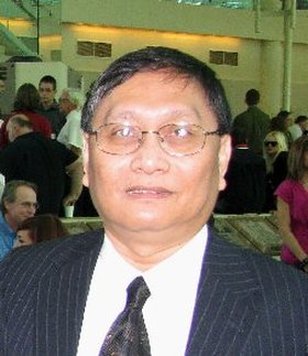 CAHSAFI (Cayetano Arellano High School Alumni Fund Intertnational) is the alumni association of Arellano alumni overseas that raises funds for scholarships. Emil was born in Baler, Aurora, and grew up and studied in Manila. Valedictorian of Class 1971, he was the editor-in-chief of Ang Tambuli under Miss Magdalena Tapang. He played the clarinet in the school's marching band under the baton of Atty. Luis Relativo. He finished BS Medical Technology and Doctor of Medicine at Far Eastern University-Dr. Nicanor Reyes Medical Foundation  where he met his future wife, the former Grace Cueto Mata,  a Doctor of Medicine also and a specialist in Internal Medicine and Nephrology. Emil immigrated to the United States and settled in Oklahoma where he has been an Anatomic and Clinical Pathologist for many years. Currently he is a Diplomate of the American Board of Pathology and a partner in a group of Pathologists affiliated with the  St. Joseph Hospital of OSF Hospital System in the Midwest.  Emil and Grace have two sons, a mechanical engineer from Illinois Institute of Technology (IIT) and a MS in Biotechnology. from Texas Tech University.

A biographical sketch by Mario Arocha
A near fatal bus accident at the busy thoroughfare of  Manila  created a great impact on the  life  of  a  boy from  far  off  Baler, Aurora and which could have altered the course of his destiny.

The young Emilio Rubio Ruidera, was on his way to Manila Science High School where he enrolled as a freshman when a wayward JD bus almost ran him over, an incident witnessed by his own mother, Mrs. Dorotea Rubio Ruidera.

Fearful for her son’s safety and always a caring mother, Mrs. Ruidera had him transferred to a school nearer their residence, the Cayetano Arellano High School.

Emilio is the fifth of nine children by Mr. Juanito Purisima Ruidera, a government employee and Mrs. Dorotea Pimentel Rubio, a housewife who was also his first teacher. He finished his primary education (grades 1 to 3) at Baler Elementary School in Aurora province, together  with  his  elder  brother and a sister.

He was as scared as the other students the first time he entered school. He fondly remembers his favorite teacher, Miss Querijero, a Grade 1 teacher.

When his family relocated to Manila, he enrolled at P. Gomez Elementary School where he completed his elementary education (Grades 4 to 6). He became friend with Alvin Sario whose family owns a photography studio and which rekindled Emilio’s desire to own a camera since he had a childhood passion to take pictures.

His enrollment to Arellano High School maybe a ‘twist of fate’ but his journey to high school life was his own design.

Such philosophical view held him in good stead as he reaped success as an Arellanite.

He was given several awards, citations and recognitions. He was adjudged Best in Mathematics  in  his  freshman  year;  second place, Model Student in junior year; First Place, NSDB National Science Essay Writing Contest in Filipino (junior year); Ang Tambuli Award as its editor-in-chief and to top it all, he graduated as the Valedictorian of class ’71.

It was not all academics that kept him preoccupied. He played clarinet for the school’s Marching Band under the baton of Atty. Luis Relativo and later on Mr. Saturnino Milanes. His penchant to write found its haven in Ang Tambuli where he became its editor-in-chief under the able tutelage of his favorite teacher Miss Magdalena Tapang.

He dabbled a lot in reading history books, newspapers and magazines. He managed to balance his academics, co-curricular activities and gallivanting with friends by prioritizing and doing things the soonest time possible.

During school vacations, his family would go back to Baler and together with his siblings would help in farm chores.

Unlike the stereotype scholarly guy who shies away from social life, Emilio had quite a good number of circles of friends in high school. Many if not all of them have remained his  friends to this day and the others who had already passed that “pearly  gate”  had left indelible  marks of  sweet memories and remembrances to his high school life.

Some low moments in life sometimes took over him when his family had to make both ends meet when they had a tight budget for a big family and the fact that all siblings were attending schools, some in high school while the others were in college. It was a good thing that his eldest brother supported his study, as well as that of his siblings. To save on school expenses, they were enrolled in schools near their residence and ate their merienda at home.

A big fire that gutted down the apartment they were renting in Sampaloc cost them all their belongings except the clothes they wore at that time. It was a big setback for the family but they got over it soon enough.

As a child, he was tutored by his cousin, an engineer, on how to solve Math problems and he inspired him to get a mechanical engineering course in college.

He ended up at Far Eastern University Nicanor Reyes Memorial Foundation (FEUNRMF) as a doctor of medicine student.

He was in his second year of surgery residency at FEUNRMF when his mother’s petition for him to migrate to America came. For some Filipinos who were burdened by the Martial law era, the opportunity to go to America was a big blessing…but not for Emilio who was smitten by a love bug to a fellow medical resident. It was the lowest ebb of his life to leave her behind.

However, they hardly felt the anguish of long separation as both were kept busy by their professions as resident physicians.

For Emilio, frustration was creeping in when he could not immediately get a job as a physician in San Francisco and he pined on the time he was a resident physician at FEUNRMF, when he knew he already had a bright and secured future ahead. However, his persistence and indomitable spirit held him together.

The Doctor is in

Today he is a successful Healthgrades Recognized Doctor in America, who specializes in Clinical Pathology and Anatomic Pathology. He has 33 years of practice on record. He considers having a happy and an excellent family as his greatest achievement.  His wife is Dr. Grace M. Ruidera, an internal medicine specialist. They are blessed with two sons who are both professionals; one is a Biomedical specialist and the other is a mechanical engineer.

Dr. Emilio Ruidera has turned back the hands of time, going back to his alma mater and giving back to it and its students fruits of his labor.

True to his character, bereft of fanfares and the trimmings of grandiose  accolades, Dr. Ruidera was instrumental in reviving the Arellano High School Marching Band which was disbanded in 1997. He singlehandedly funded the purchase of new band instruments and in 2010 the rebirth of the Cayetano Arellano High School Marching Band came to reality. It’s one  project  closer  to  his  heart-  himself being a former member of the school band.

He also upgraded the facilities of the journalism classes of the school. With his financial support, it was able to acquire internet connectivity, purchase brand new laptops, desktop computers, video cameras, digital cameras, DSLR camera, printers, complete sound system, computer softwares and hardwares, and others.

The school rondalla was also blessed by his generosity.

As one of the pillars of the newly- organized association of Arellano alumni, the Cayetano Arellano High School Alumni Fund International (CAHSAFI), which ultimate goal is to support the school and its students, he has helped design the organization’s projects and other services.

Above and beyond these acts of faith in his alma mater and its studentry and the kind generosity he has exemplified, he has rekindled the waning hopes and aspirations of Arellanites who have less in life.