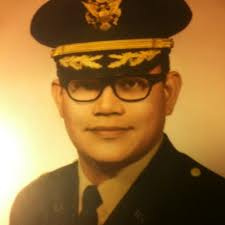 He took up medicine at the University of Santo Tomas (UST) and University of Maryland School of Medicine and Hospital. He went to premed and medical school through the US Educational Benefits of his dad who served in USAFFE even before WWW2.

He graduated in 1963 and became a faculty at the UST Faculty of Medicine and Surgery. He also attended the University of Maryland in Baltimore where he specialized in Anesthesiology and Brooke Army Medical in Military Medicine.

He obtained his General Surgery Residency at the Lutheran Hospital of Maryland, then became
House Surgeon at the Fairfax Hospital in Falls Church, Virginia; and, later, the General Surgeon, at Baltimore, Maryland. He served in the US Army in Vietnam in 1970-71, as well as, in Germany and Japan.

He came from a poor background in life although his father retired as a Colonel in the defunct Philippine Constabulary.  As
an "Army Brat", his family went wherever the  dad was stationed. So when he was Detachment Commander of the P .C .in Balayan , Batangas,  Manuel studied at Immaculate Conception College , etc.,  until his dad's Army retirement at Camp Crame . He finally finished elementary education at F. Balagtas Elementary School and then continued secondary education at AHS Manila North HS. Using his dad's US Educational Benefits, he took the entrance exams at UST College of Liberal Arts for Pre-Medicine and then enrolled at the UST Faculty of Medicine & Surgery graduating with MD degree on 3/28/63 . During all these times , he was also doing extra work outside to supplement his stipend from the US Veterans Administration . During those days, the living condition was a lot cheaper. A  P2 daily allowance included food and transportation. To save money, coming from Grace Park, he walked to UST from Rizal Avenue instead of taking UST- Morayta jeepney at Blumentritt .

On 15 June 1964, he went to Baltimore to start postgraduate medical training starting as medical intern, residencies in General Surgery at Lutheran Hospital of Maryland , and another residency in Anesthesiology and Critical Care Medicine at University of Maryland in Baltimore . He retired from both Private Medical Practice as Senior Anesthesiologist and Critical Care Medicine at Harbor Hospital Center in Baltimore .

His  US Army career started at Brooke Army Medical Center in San Antonio Texas , then various US Army hospitals in USA and many overseas assignment including General Surgeon of the US 27th MASH in Chu Lai South Vietnam providing medical support to the US 23 rd Infantry Division and US Marines . Finally, he retired as Colonel , 0-6, Medical Corp , US Army after 28 years of dedicated service in 20 August, 1996.